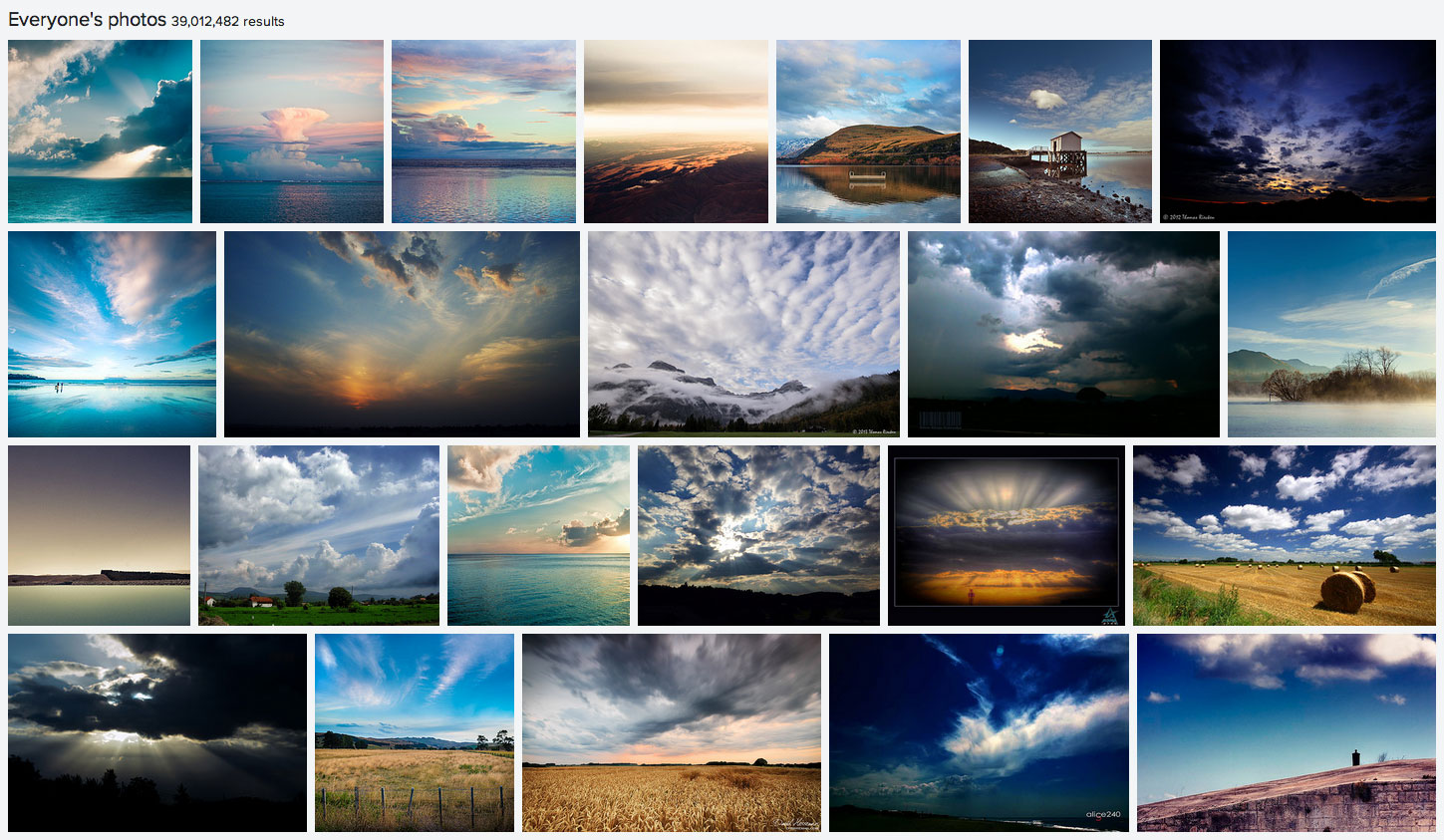 Here at Flickr, we have photos. Lots of photos. Like, billions and billions of photos. So, it’s pretty important for us to be able to show you more than one at once.

We have used what we call the “justified algorithm” to lay out photos for a while now, but as we move more and more pages onto our new-ish isomorphic node.js stack, we determined it was time to revisit the algorithm and create an updated implementation.

A few of us here in Frontend-landia got together to figure out all the things this new shiny should be able to do. With a lot of projects in full swing and on the near horizon, we came up with a pretty significant list, including but not limited to:
– Easy for developers to use
– Fit into any kind of container
– Support pagination (in both directions!) and infinite scroll
– Jank-free, butter-silky-baby-smooth scrolling
– Support layouts other than justified, like square thumbnails and grid layout with native aspect ratio

After some brainstorming, drawing of diagrams, and gummi bear consumption, we got to work building out the framework and the underlying algorithm. 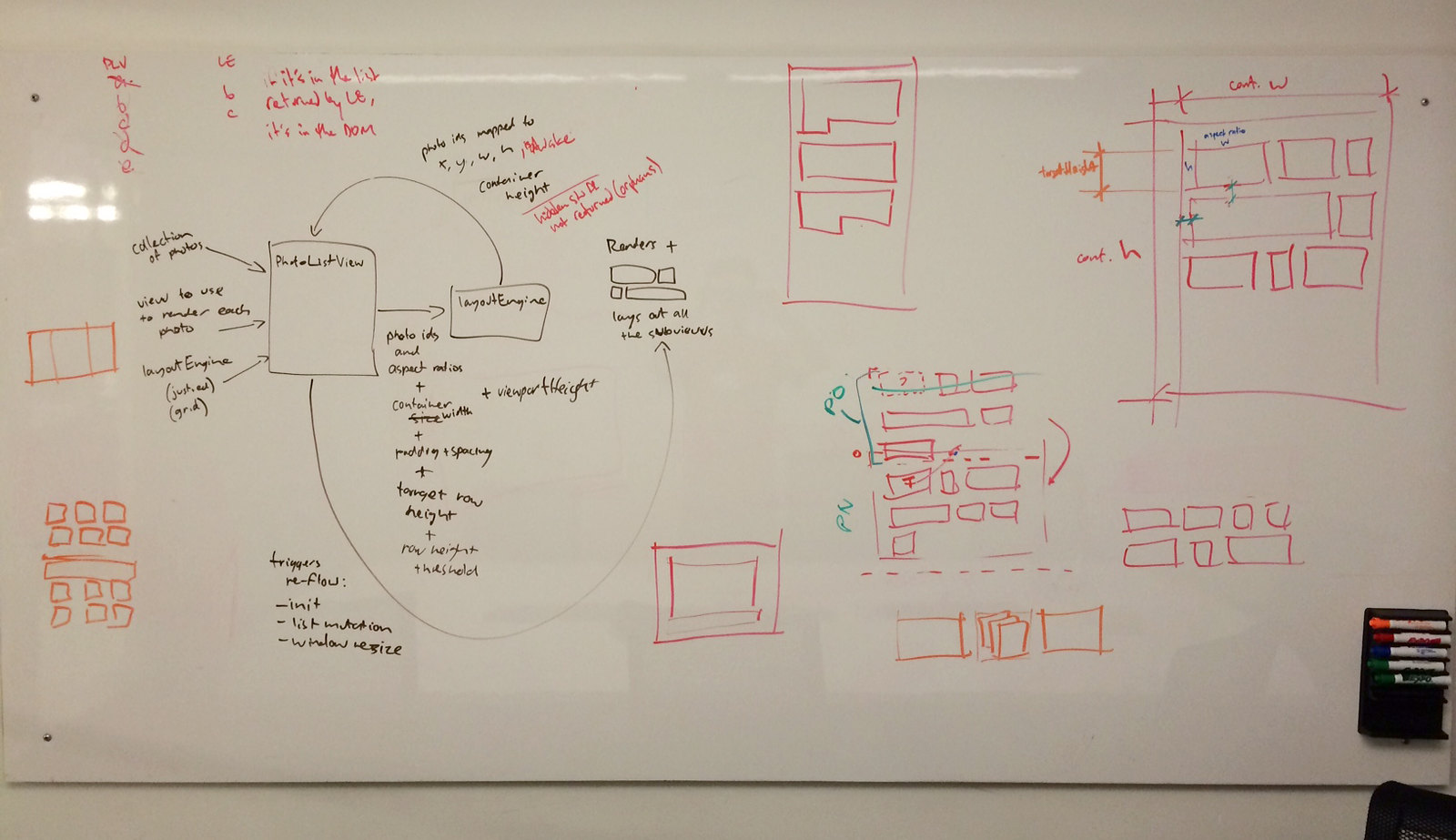 The basics of the justified algorithm aren’t too complex. The goal is for the layout module to accept a list of photo aspect ratios, and return a list of rectangles. A layout consists of a number of rows of items (photos), each with a target height and allowable height deviation above and below. This, along with the container width, gives us a minimum and maximum row aspect ratio.

We push each photo into a row; once the row is filled up, we move on to the next. It goes a little something like this: 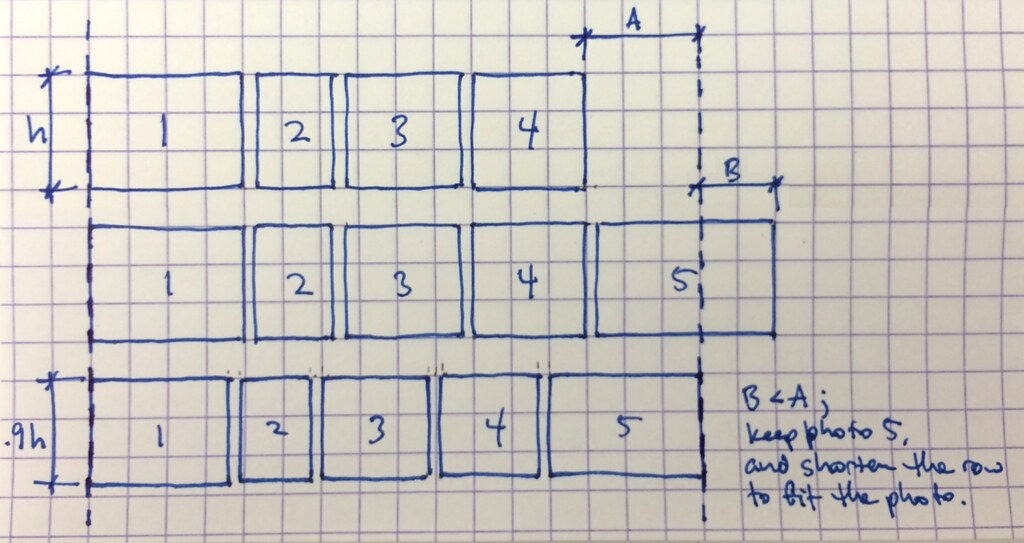 The justified algorithm described above is the primary responsibility of the layout module. In practice, however, there are a number of other things the layout must handle to get good results for all use cases, and to communicate the results to other parts of the framework.

The container view can process only the parts of the layout response that are necessary, given the current state of the whole framework, to keep processing time down and keep performance up. 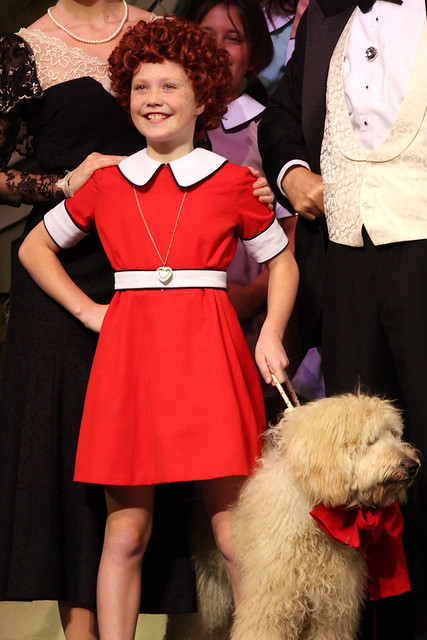 Annie the Musical, by Eva Rinaldi

Some photolist pages on Flickr use infinite scrolling, and some display results one page at a time. Regardless of how a page shows its photos, it starts to feel messy when there is an incomplete row of photos hanging off the end of the page. If there is more content in the set, the last row should be full. However, since we fetch photos from the API in fixed batch sizes, things don’t always work out so nicely, leaving “leftovers” in the bottom row. Borrowing from typesetting terminology, we call these leftover photos orphans. (We can also paginate backwards; leftovers at the top are technically widows but we’ll just keep using the term orphans for simplicity.)

The layout notes these incomplete rows and hides them from the rest of the framework until the next page of content loads in. (This led to frequent and questionable metaphors about “orphan suppression” and “orphan rehydration.”) When orphans are to be hidden, the layout simply keeps them out of the diff. When the orphans are brought back in as the next page loads, the layout prepends them to the next diff. The container view is none the wiser.

This logic gets even more fun when you consider that it must perform in all of these use cases:

There’s also the case of the end of an “infinite” content set (scrolling down to the end or up to the beginning); in these cases, we still want the row to appear complete, and still must maintain the native aspect ratio of the photo. Therefore, we allow the row height to grow as much as it needs in this case only.

You might have noticed that Flickr is kind of a big site with, like, lots of photos. And we display photos in lots of different ways, with lots of different use cases. The photolist framework bends over backwards to support all of those, including:

Going into detail on each of those features is way beyond the scope of this blog post, but suffice it to say the framework is built to handle just about anything Flickr can throw at it. The one exception is the upcoming Camera Roll (coming soon to those of you who don’t yet have it!), which is Too Extreme for this framework, so we devised something special just for that page. 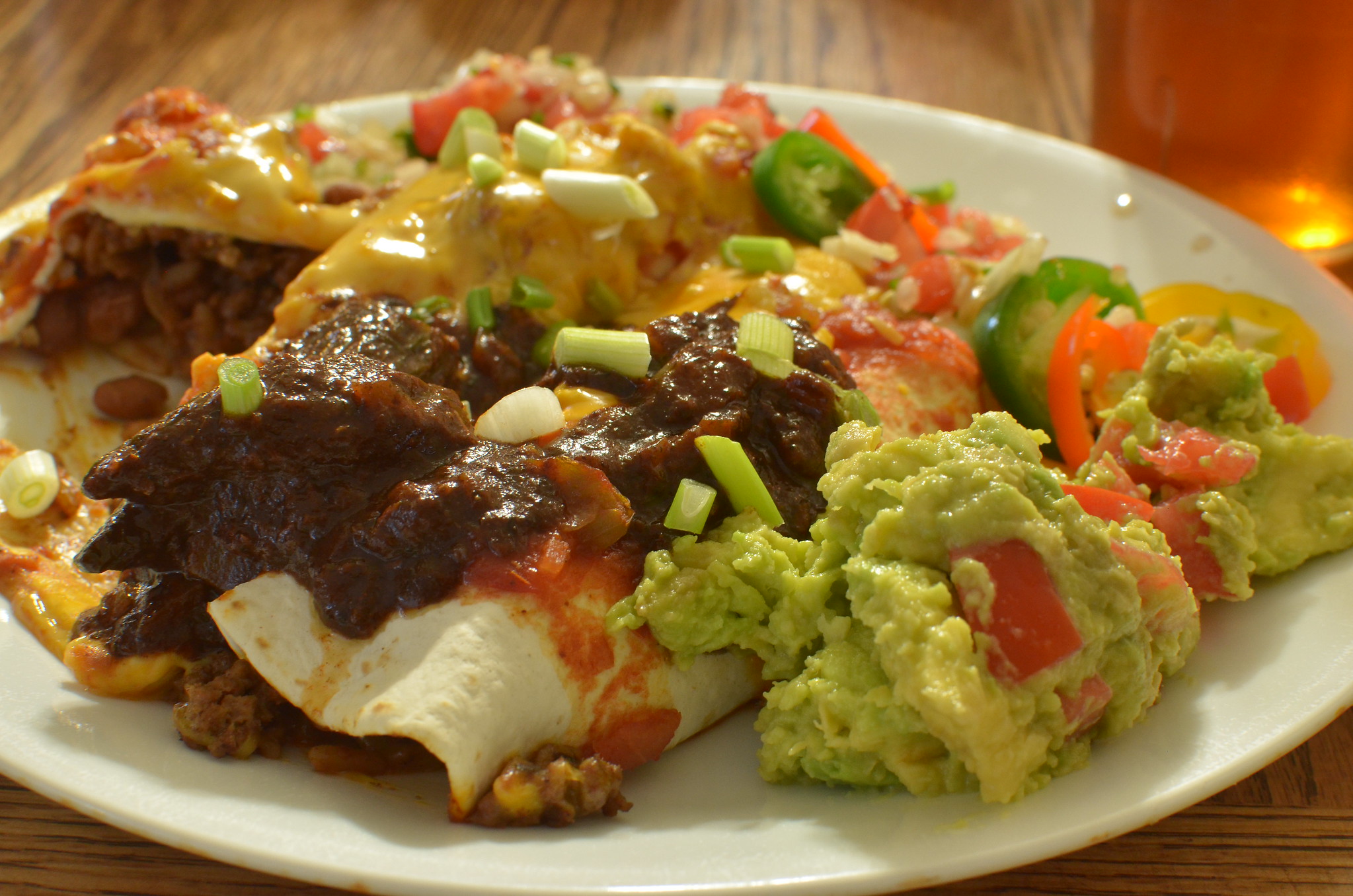 The layout is at the heart of the photolist framework, but wait — there’s more! The main components of the framework are the layout (dissected above), the container view / controller, and the subviews (usually containing photos).

The container view does a lot of fancy things, like:

Its primary job, though, is to act as the conduit between the layout module and the individual subviews.

The subviews each have a decent amount of intelligence of their own, performing such tasks as:

Coming soon to a webpage near you

The new photolist framework is certainly not a one-size-fits-all solution; it’s tailored for Flickr’s specific use cases. However, we tried to design and build it to be as broadly useful for Flickr as possible; as we continue to move parts of the site onto the new frontend stack and innovate new features, it’s critical to have solid components upon which we can build Flickr’s future. The layout algorithm is probably useful for many applications though, and we hope you gained some insight into how you might implement your own.

The photolist framework is already live in a number of places on the site, including the new Unified Search pages (currently in Beta), the Create / Wall art pages, the Group pool preview, and is coming soon to a number of other pages.

As always, if you’re interested in helping with that “and more” part, we’d love to have you! Stop by our jobs page and drop us a line.

We care an awful lot about the kinds of browsers and computers visiting Flickr. As people update to the latest versions of their browsers, the capabilities we can build against improve, which lets us build cool new things. At the same time, if lots of people continue using older browsers then we have to do extra work to gracefully support them.

These days we not only have incredibly capable browsers, but thanks to the transparent and rapid update process of Chrome, Firefox, and soon Internet Explorer (hooray!), we can rely on new features rapidly showing up en masse. This is crazy great, but it doesn’t mean that we can stop paying attention to our usage statistics. In fact, as people spend more time on their phones, there’s as much of a need for a watchful eye as ever.

We’ve never really shared our internal numbers, but we thought it would be interesting to take a look at the browsers Flickr visitors used in 2014. We use these numbers constantly to inform our project planning. Since limitations in older browsers take time to support we have to be judicious in picking which battles to fight. As you’ll see below, these numbers can be quite dynamic with a popular browser dropping to nearly 0% market-share in just a year. Let’s dive in and see some specifics.

At the highest level we learn a lot by looking at our OS family data. Probably the most notable thing here is how much of our traffic is coming from mobile devices. Moreover, the rate of growth is eye-popping. And this is just our website – this data doesn’t include our iOS or Android clients at all. A quarter of our traffic is from mobile devices.

Let’s slice things slightly differently and look at browser families. We greatly differ from internet-wide traffic in that IE isn’t the outright majority browser. In fact, it clocks in at only the #4 position. More than half of Flickr visitors use a Webkit/Webkit-heritage browser (Safari and Chrome, respectively). Chrome rapidly climbed into its leadership position over the last few years and it’s stabilized there. Safari is hugely buoyed by iOS’s incredible growth numbers, while IE has been punished by Windows’s Flickr market-share decline.

We can go a step further and see many details in the individual versions of OSes and browsers out there. It’s one thing to say “Windows is down 6% over the year” but another to say “the growth rate for the latest version of Windows is 350% year over year.” When we look at the individual versions we can infer quite a bit of detail around update rates and changes in the landscape.

* We didn’t start breaking out individual versions of OS X until Q1 2014. So unfortunately for this post we don’t have great info breaking down the versions of OS X, but we will in the future. OS X 10.10 did not exist in Q1 2014 so it’s counted as a natural 0% in our Q1 data.

These are the most dynamic numbers of the bunch. If there’s one thing they prove, it’s how incredibly effective the upgrade policies of Chrome and Firefox are. Where Safari and IE have years-old versions still hanging on (I’m looking at you Safari 5.1 and IE 8.0), virtually every Chrome and Firefox user is using a browser released within the last six weeks. That’s a hugel powerful thing. The IE team has suggested that Windows 10’s Project Spartan will adopt this policy, which is absolutely fantastic news. A few highlights:

* These are catch-all versions of Mozilla-based and Webkit-based browsers that aren’t themselves Firefox, Safari, or Chrome.

A word on methodology

These numbers were anonymously collected using Yahoo’s in-house metrics libraries. The numbers here are aggregated over the course of three months each, making these numbers lagging indicators. This is why the latest releases, like Android 5.0 and iOS 8.1, are under-represented – they hadn’t yet enjoyed one full quarter when 2014 came to a close.

There are a number of excellent sites out there watching similar browser statistics on a continuing basis. A few of them are: